In a recent Cell paper the authors provide an elegant approach to create a G12/13-preferring DREADD.  This will have a huge impact!
Post a Comment
Read more

Dissolving Salvinorin B for KORD experiments

May 27, 2019
From Krashes lab: We make SalB fresh the day of injection.  We use pure DMSO to dissolve SalB at a 10mg/kg concentration. For a 30g mouse:  30uL of a 10ug/uLsolution It's a very small volume, we usually do SC injection
Post a Comment
Read more

July 19, 2018
An interesting and provocative paper recently published in Nature Communications: " Modulation of anti-tumor immunity by the brain’s reward system " They conclude: " Activation of the reward system in tumor-bearing mice (Lewis lung carcinoma (LLC) and B16 melanoma) using chemogenetics (DREADDs), resulted in reduced tumor weight. This effect was mediated via the sympathetic nervous system (SNS), manifested by an attenuated noradrenergic input to a major immunological site, the bone marrow. Myeloid derived suppressor cells (MDSCs), which develop in the bone marrow, became less immunosuppressive following reward system activation. By depleting or adoptively transferring the MDSCs, we demonstrated that these cells are both necessary and sufficient to mediate reward system effects on tumor growth. Given the central role of the reward system in positive emotions, these findings introduce a physiological mechanism whereby the patient’s psychological state can impact anti-
Post a Comment
Read more

This is a pretty amazing paper which can be found here: The basic approach is outlined above and seems to work amazingly well in mice.  Great to see if this can be translated to larger brains.
Post a Comment
Read more

Our new paper is now out in BioarchivX and can be found here.   A Chemogenetic Platform for Spatio-temporal Control of β-arrestin Translocation and Signaling at G protein-Coupled Receptors
Post a Comment
Read more 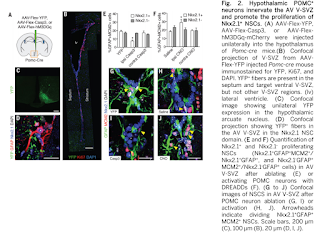